This Sunday, the ninth after Pentecost, I was with the people of Christ the King - Epiphany Church  in Wilbraham. It's a merged ELCA and Episcopal congregation that has just called a new pastor. One thing they do now as they have regathered is to keep a tradition they began during Zoom worship of having conversation after the sermon. It was great to have that opportunity for dialogue.

At the beginning of the sixth chapter of the mystical fourth gospel, Jesus feeds a large crowd of thousands with a couple of fish and five barley loaves. This "feeding of the 5000" is a favorite of my boss, the Rt. Rev. Douglas Fisher. So I hear about it all the time. (And I do mean ALL the time!)

It is a story found in all four gospels, each with its own tiny little nuanced differences. Don’t let those differences trouble you; I think they are all right in the same way that is confirmed whenever my family is gathered for a big gathering and the four kids – now all grown up – start to tell stories from our youth. We agree on the broad strokes but we slant the story as we remember it based on birth-order, gender, etc. It’s similar for the four gospel writers.

So, only in John’s gospel do the fish and loaves come not from the disciples, but from a small boy, suggesting that his willingness to share the lunch his mother packed for him is an integral part of the miracle. The common thread in all four tellings, however, is that it is so clearly a Eucharistic story.  Jesus takes, blesses, breaks and gives the bread. Those four verbs are meant to trigger the imagination of God’s people from one generation to the next, because in a very real way we re-tell the story of the feeding of the five thousand every time we gather to celebrate the Eucharist.

There is more than enough. There is always room for one more at the Table. In this taking, blessing, breaking and giving we see Jesus for who he really is. We see God for who God really is, the maker of all things, and the Giver of abundant blessings.

As John tells the story of the feeding of the 5000, it is immediately after this that the crowds try to make him a king. We are reminded of Jesus’ temptation in the wilderness, and the danger of being able to perform such great signs. People often flock to miracle workers, missing the deeper meaning. So Jesus withdraws to the mountain to be still, to be with his Abba in prayer. The disciples get back in their boats and cross to the other side of the lake. That’s when Jesus comes to them, with another sign: walking on the water, and calming the storm as they cry out in fear.

The next day some persistent “groupies” find Jesus and the disciples on the other side of the lake. They want him for the miracles he can do. They want more magic. But Jesus pushes them to go deeper…to look for the true bread, not the bread that perishes. And then when they ask for that true bread, he says “I Am.”  I am the bread of life.

Once more, John is teasing us with Biblical language; sacramental language. Our culture (not just our so-called secular culture but even, very often, our church culture as well) has a hard time with this kind of talk. We lack the imagination for it. So we hear people say, “well, it’s just a symbol.” But anyone who says “just” when they talk about symbols really doesn’t understand symbols.

Can you imagine anyone saying, “it’s just a wedding ring?” Or it's just the house where we raised our children? Or it's just the church where my grandchildren were baptized. It's just silly to use the word "just" when talking about sacramental truths: outward and visible signs that convey something deeper, something more.

Such talk assumes that only literal truth is real. But the facts alone can never convey the deepest truths of our lives: what we care about, how we love, what we dream of and yearn for. One of the great gifts of our Lutheran and Episcopal heritages to the wider Church is our profound respect for mystery and sacramental language. Water and oil, bread and wine convey profound truths about what is really real. You can touch and taste and smell and see them, and yet what they convey goes deeper, to the heart.

Outward signs convey inward, spiritual truths. So Jesus says, “I am” like the Voice from the Burning Bush called to Moses and told him to Go tell old Pharaoh to “let my people go!” I am… the bread of life.” And he really means it. It's really true. Week after week we are invited to test that reality by "tasting and seeing."

The great privilege of priestly ministry, of presiding at the Lord's Table, is to take and bless and break and give the Body of Christ to the Body of Christ. Doing that stretches my faith and invites me, as a priest, to see how the Body of Christ is not just to be discerned as present in the bread, but also in the people of God. The Church continues to be formed and transformed around that Table: male and female, young and old, gay and straight, traditional and progressive. Lutherans and Episcopalians! We are many members, but one Body, taken, blessed, broken and given for the world.

Nearly twenty years ago, I read one of those books that stays with you for a very long time: Torture and Eucharist: Theology, Politics and the Body of Christ, written by William T. Cavanaugh. It’s a very challenging and even disturbing book about Pinochet’s Chile, where torture was a part of daily life. “Torture,” Cavanaugh writes, “creates victims.” We might just as well say that fear creates victims. Family strife, wars and viruses, consumer society gone amuck, trauma: they all create a society of victims that desperately search the self-help section of the bookstore looking for easy answers to profound questions.

In response to that harsh reality we live toward a deeper truth: Eucharist creates witnesses. We gather to tell stories about a boy who opens his lunch box to find a couple of barley loaves and five fish that he is willing to share. We remember how he took the risk of offering them to Jesus. We remember the manna in the desert, daily bread for a people in search of the Promised Land. We point especially to this One who is the Bread of Life, the One who satisfies our hungry hearts and quenches our thirsting souls. The One who takes, blesses, breaks, and gives. In so doing, witnesses are formed: a people after God’s own heart who can share the story of God’s love (sometimes even with words) to the world, a world where so many are abused and tortured and victimized in literal and other ways.

In her poem, Logos, Mary Oliver puts it all this way:

Why worry about the loaves and fishes?
If you say the right words, the wine expands.
If you say them with love
and the felt ferocity of that love
and the felt necessity of that love,
the fish explode into many.
Imagine him, speaking,
and don’t worry about what is reality,
or what is plain, or what is mysterious.
If you were there, it was all those things.
If you can imagine it, it is all those things.
Eat, drink, be happy.
Accept the miracle.
Accept, too, each spoken word
spoken with love. 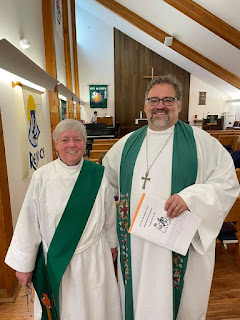 So, Christ the King – Epiphany: you have had quite the pandemic journey. You lost a beloved pastor and then welcomed a faithful bridge priest. Thanks be to God for both Karen and Barbara. And you have an amazing deacon in Pat O'Connell. Now you called Martha to serve among you as your pastor and priest. I know that it’s been hard enough to do all that, not to mention the complexities of two denominational systems.  Kudos to Joanne and Jean who have been faithful leaders through it all – and to the profile and search committees and vestries. I'm grateful also for the collegiality of the Rev. Steven Wilco. Many hands have made lighter work.

Now what? On the other side of this, you are not victims. You are at the very least survivors but I want to suggest more than that, even: you are witnesses. Witnesses to the power of resurrection. Witnesses to the love of God made known in Jesus Christ.

To paraphrase St. Bono:  You are One. You’re not the same. But you get to carry each other. Carry each other. You have been, and I trust will be, faithful followers of Jesus, with God’s help. The best is yet to come.

Posted by Rich Simpson at 8:29 AM No comments: 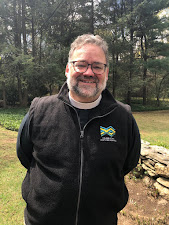 I have been married to Hathy since 1986 and we are now empty nesters who have raised two adult sons, who both live in New Jersey.