Warning - this will be a long post and perhaps different from most of my posts. I am a pastor and preacher with theological interests. But I have never claimed to be a theologian. But this is a theological post, prompted by the fact that on August 28,430, Augustine of Hippo died. And so he is remembered by the Church on this day, and I've been thinking about him lately for this reason.

The word theology, comes from two Greek words: theos (God) and logos (word). Theology is, therefore, discourse about God, in much the same way that “biology” is discourse about life (bios). It's not a word found in the Bible. The late second-century writer, Clement of Alexandria, contrasted theologia with mythologia of his day; the former became a “church” word used to contrast with the stories and myths of pagan mythology. (Remember that Christianity came into existence in a polytheistic world.) Christian theology is reflection upon the God whom we adore and worship in and through Jesus Christ.

None of this is very new or maybe even exciting, but I think it's helpful to define terms. Although I said above that I am primarily a pastor and preacher, in fact there is a theology that is always implicit and undergirding how I do those other things, as there is with all of us. Some theologies are fairly simple, which doesn't mean they aren't true. ("Jesus loves me, this I know, for the Bible tells me so...") Other theological concepts are more complex (or at least difficult to understand) like the Atonement. But all of it is about faith seeking understanding.

One question that arises across denominations and across the centuries is this: what are the authoritative sources for doing theology. For some, it is scripture alone. For others, it is the teaching of the Church, through bishops. For others it is about being slain in the Spirit and a first-hand experience of the living God. Many of our theological differences have their roots in what we claim as our sources. Richard Hooker, an important early Anglican theologian, spoke of the role of Scripture, Tradition, and Reason as the sources for doing theology. But we do well to remember that in Hooker's time (the sixteenth century) reason meant both rationalism and empiricism. In other words, it encompassed both reason and experience. United Methodists, whose roots are Anglican, make this explicit and speak of scripture, reason, tradition and experience. Episcopalians, when speaking of the three-legged stool (scripture, reason, and tradition) do well to remember that at least implicitly, to be true to Hooker, we need also to consider about our experience of God and of God's world.

This post is about one aspect of the “tradition” by which I don't mean American Christianity during the Eisenhower administration. The roots of our living tradition go much deeper than that. Tradition isn't about literal rigid adherence to the past; but it can mean “attentiveness” to what other pilgrims have learned that might be helpful in our own context. Finally, and then on to good old Augustine: we do well to remember, though, that then (as now) theology is shaped by culture. There is no "pure" theology; it is all contextual. So learning from the past is about gleaning what is helpful today.

On the other side of that argument, Augustine got clear about what would come to be called the Doctrine of Original Sin. He had some blind spots about that, to be sure, and he had his own issues. So he got it confused with sex. But what he wanted to say is that we are born into Sin, that it's bigger than the choices we make. As that theologian from the swamps of Jersey puts it (in a very Augustinian way):

...you're born into this life paying for the sins of somebody else's past, Daddy worked his whole life for nothing but the pain, Now he walks these empty rooms, looking for something to blame, You inherit the sins, you inherit the flames, Adam raised a Cain. (Bruce Springsteen)

What is being claimed here is that Sin is a part of existence, not only about bad moral choices. We get "caught" in it as much as we choose it. Luther, of course, was an Augustinian monk before he nailed those theses on the door of that church in Wittinberg. Through the centuries this Augustinian influence shaped Luther and then, eventually, a twentieth-century theologian named Paul Tillich, who famously said that Sin is separation. To experience life as separation - from God, from others, from even our own true selves - is not a choice. It's just part of life.

Sin abounds. Thankfully, grace abounds all the more. As far as I can tell, whether claimed explicitly or not, the theology that under-girds 12-Step spirituality is also indebted to Augustine. Pelagius would say that if you want to be sober, just stop drinking. Just say no! But the experience of so many who are caught in the throes of addiction is that they are powerless on their own to do that. Recognizing that powerless and overcoming separation by turning to one's "higher power" and to the power of a group of people is step one that allows for healing to begin. One day at a time.

Why does this matter? Well, this is what I've been thinking a lot about although it's taken me some time to get here. I suppose that people with a more solid theological background could just start reading this post here.

A few years back, Barbara Brown Taylor wrote a little book called Speaking of Sin. In that book she wrote these words:

I remained aware enough of social sins to be surprised when religious people wanted to focus on sexual sins instead. I suppose that when poverty, crime, and degradation of the environment start looking unbeatable, then it is predictable that people will shift their attention to an enemy who seems easier to attack.

The American Church has, it seems to me, by and large tended toward Pelagianism. Augustine "won" the theological battle in his day but Pelagius "won the war," as it were. We tend to think we can do what we put our minds to doing; that we can fix things - as if they were things: ourselves, our congregations, the neighborhood. Yet this has continued to make it very difficult for us to even speak honestly about big systemic sins like poverty and crime and degradation of the environment; and I would add, systemic racism. So we tend toward Pelagianism when we think that if can just rid a police department of the few bad apples or change some hearts that we'll be on our way. And when that doesn't happen, we get discouraged.

Yet Sin abounds. The work really is about dismantling racism, one day at a time and that is going to take some commitment and dedication and hard work. Sin abounds. Even so, grace abounds all the more. But not like a magic wand or a quick fix. More like the journey of healing that happens one day at a time.

How we learn to live into that gift, one day at a time, is at the heart of the spiritual journey. Naming things rightly, and rediscovering a vocabulary for Sin, may be a modest first step. Perhaps as we remember Augustine of Hippo we can remember what he learned about the life of faith. I have come to believe that a good healthy doctrine of Sin is actually the beginning of the theology of hope, in much the same way that 12-step programs are. We begin by telling the truth, which allows us to become agents of reconciliation and repairers of the breach, toward building the City of God.

Augustine lived in a time not so different from our own, as the once great Roman Empire was coming unglued. Pelagius wanted to fix it but it was too far gone and eventually Rome fell. Yet that would not be the end of the story, and Augustine wrote The City of God. That may be another long post, for another day.

Posted by Rich Simpson at 7:10 AM No comments: 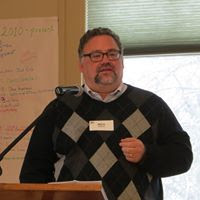 I have been married to Hathy since 1986 and we are now empty nesters who have raised two adult sons, now 29 and 25. Both live in New Jersey.